Guided tours are the most complete package for travelers, where every single aspect of the trip is taken care of.

Groups of riders travel together with a professional bi-lingual guide and a support chase van with spare motorcycle. This is the most social experience that he sense of camaraderie turns into friendships for life. 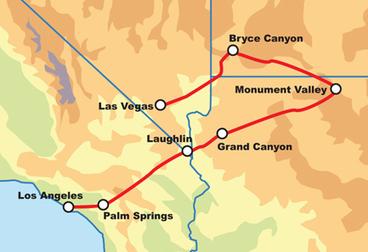 See the solitary deserts, vibrant cities, deep canyons and high mountains – on the Wild West Guided Motorcycle Tour I. Climb on your favorite Harley and ride through the South-West on this 8 day motorcycle adventure: Grand Canyon, Bryce Canyon, Monument Valley, Los Angeles and Las Vegas. With over one thousand miles of pure motorcycle bliss, you don't want to miss out on the ride of your life.

Today your Wild West journey begins! Please take the shuttle bus to your Los Angeles airport hotel. You will meet your guides and your fellow riders in the hotel lobby to head over to pick up your bike. Afterwards you'll go over information about your upcoming trip. After the meet and greet, make sure to explore L.A.’s night life in Hollywood or Santa Monica or just get a goodnight sleep and get ready for the first day’s ride tomorrow!

After our Welcome Breakfast the moment has come - you will get transferred to to pick-up your bike. After an orientation we head south and west to ride the winding mountain road down to Lake Elsinore. After lunch, the cool air bathes us as we wind our way up more mountainous roads into the San Bernardino National Forest, skirting the slopes of San Jacinto Mountain. Our descent into Palm Springs is spectacular, and we will enjoy our first night on the road among the Palm Trees and night life that make up this iconic town.

Today we take a loop through Joshua Tree National Park an extraordinary park full of bizarre desert trees and fantastic rock formations. From here we descend into Twenty-Nine Palms and drop into the vastness of the Mojave Desert. From here, your trip gets legendary appeal, as we enter Historic Route 66 in at the famous Roys in Amboy. We will stay on RT 66 for the rest of the day as we cross the desert, and the state line, into Nevada, and arrive in Laughlin, where we overnight.

We continue our ride on legendary Route 66 into Arizona, stop for wild animals in Oatman and ride further on to Kingman, which is considered to be “The heart of Historic Route 66”, as it’s situated in the middle of the longest remaining stretch of the old “Mother Road”. From Kingman you head for Seligman, another one of the longest surviving stretches of Route 66, which heads off in a northern loop through the Hualapai Indian Reservation. After our lunch stop in Seligman we continue our ride towards the majestic Grand Canyon; be prepared for one of the greatest sights man has ever seen!

We spend the morning at the Grand Canyon to get some fantastic views. Then we’ll cruise along the South Rim for a few miles and leave Grand Canyon National Park at the East entrance. Now it’s off to the incredible Monument Valley. This is Navajo Country here a classic Wild West landscape of stark sandstone buttes and forbidding pinnacles of rock, poking from an endless expanse of drifting red sands. Only when you arrive at Monument Valley will you come to realize how much your perception of the West has in fact been shaped by this one spot. Such scenery does exist elsewhere, of course, but nowhere is it so perfectly distilled. This evening we will be provided with the option to descend into the Valley itself and let our Navajo Guides treat us to stories of life in the heart of this spiritual wonderland.

From Kayenta we will ride up to sleepy Mexican Hat, briefly a frenzied gold-mining camp, which takes its name from a riverside sandstone hoodoo – it actually looks like a south-of-the-border sombrero. We ride on past the Valley of the Gods, where much of the movie “Thelma and Louise” was filmed, and cross the Colorado River where it pours into Lake Powell. Lake Powell has 1960 miles of shoreline, which is more than the entire Pacific Coast and 96 water-filled side canyons. We ride along the southern tip of Capitol Reef National Park, across aspen-covered peaks, along the buff-colored sandstones of the Devil’s Backbone, through the Escalante Wilderness, and finally to Bryce Canyon, where we overnight. This is a day you'll never forget!

This morning there will be time to visit the amazing Bryce Canyon before we continue to Zion National Park. Besides seeing the most beautiful rock formations found anywhere on earth, you are in for a gorgeous ride here – the switchbacks of Zion! Compared to Yosemite and the Grand Canyon, Zion exudes a stronger sense of nature. From Zion it is only a short ride into the neon and gambling oasis of Las Vegas. Those clients, who will end their trip in Las Vegas, will have a “Good Bye” Dinner this evening.

We hope you enjoyed your tour. Be sure to let us know if you would like to spend some extra time in Las Vegas or keep your motorcycle a bit longer and we will make the arrangements for you. 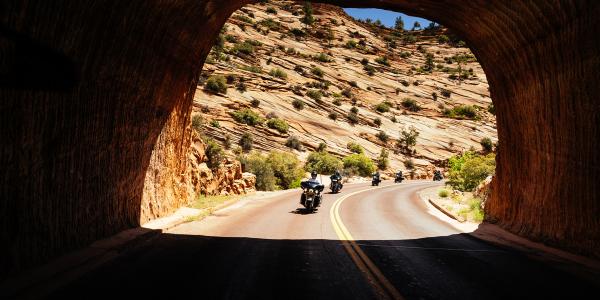 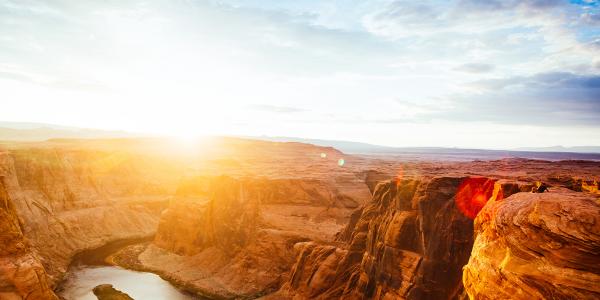 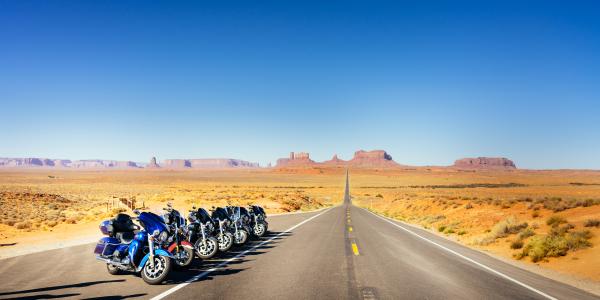 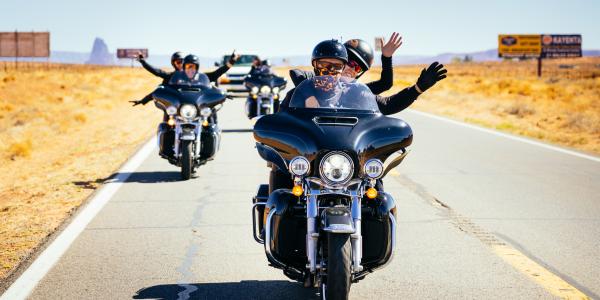 Pricing and Availability from $3,550