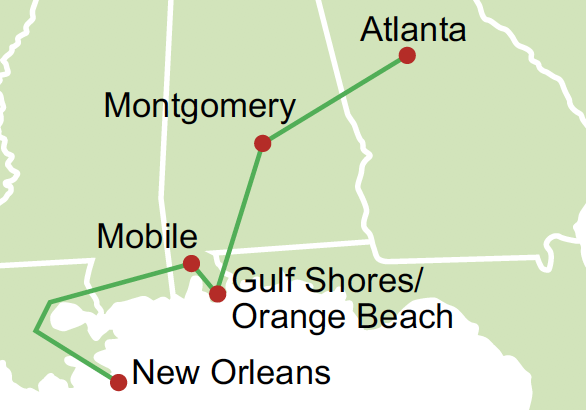 A holiday to USA’s South Coast is an exciting adventure filled with food, fun and sun.

In this 11-day road trip you will see where America’s civil rights history took place in Montgomery, experience sun on the beach in Gulf Shores and party in Mobile and New Orleans. This road trip from Atlanta takes you to the Southern Coast to the sun, excitement and history of America.

When to Visit the Deep South
We suggest the USA  Winter or Spring / Fall would offer the best  temperatures. In the Deep South, summer isvery hot and humid, which can make for an uncomfortable trip

Want to see Mardi Gras festivities, these vary in timing as they change every year. It usually falls somewhere in February or March.
If you’re not interested in Mardi Gras, it’s best to avoid cities that celebrate it during this time, particularly places like New Orleans, Mobile and Baton Rouge, as accommodations will be both expensive and hard to find.

What to Eat in the Deep South
Don’t come to the Deep South and expect to lose weight. Portions are large and the food is definitely waist expanding.
Gumbo – A soup which can be made with seafood or meat and is either cajun or creole in style
Jambalaya – A rice dish with a mix of meats, usually including smokey sausage
Fried Chicken – an absolute must-try when journeying through the south. Not what you are used to in Australia.
BBQ – the origins of BBQ are definitely in the south. Different regions have different BBQ sauce styles, with the classic meat being pork.
Grits – Served generally as an accompaniment, they are made from ground corn which is boiled. Tastier than they sound!

Open all Close all
1 & 2
Arrive Atlanta

Arrive in Atlanta, the capital city of Georgia.

Head to the  Georgia Aquarium , where you can see more than 120,000 animals of 500 different species in more than 8 million gallons of marine and fresh water. Touch tanks, 4-D theatre, Whale Sharks, Beulga Whales and more are perfect for kids of all ages!

At the  Inside CNN Atlanta Tour , watch behind-the-scenes action of the newsroom, see what it takes to put a news broadcast together and even learn how the weather map works.
Tip: Make reservations in advance for the 50-minute tour.

Try The  SunDial Restaurant Bar & View for lunch (on top of the Westin Peachtree Plaza, the tallest hotel in the Western Hemisphere) offers breathtaking views of downtown Atlanta.

Head to the World of Coca-Cola , where the famous soft drink's story is told through fascinating exhibits, classic ads and an imaginative replica of the bottling process.

Visit the Jimmy Carter Presidential Library & Museum, next to The Carter Center. The library includes a replica of the Oval Office and Jimmy Carter's Nobel Peace Prize, as well as traveling exhibits.
Tip: Transportation to the MLK National Historic Site or Jimmy Carter Library/Carter Center would be best by car (both locations have free parking) or  MARTA bus. You also can enjoy the Carter-King Peace Trail pedestrian and bike path between the two attractions. Commemorative plaques can be found along the 1.5-mile walk.
Evening  Option #1: Between April and October, catch an  Atlanta Braves baseball game, including pre-game pep rallies and testing your hitting or throwing skills at Scout's Alley.
Tip: Visitors are allowed to bring food into the ballpark, so grab dinner at  The Varsity , an Atlanta landmark on North Avenue, serving chili dogs, hamburgers and the signature Frosted Orange.  Picnic tables are right inside the ballpark's entrance.
Option #2: In the cooler months, you can attend an Atlanta Hawks basketball game at State Farm Arena.

Wake up in Montgomery, Alabama's state capital, and see both Civil War and Civil Rights history in this true Southern city. Events occurred at almost identical locations, although years apart. In 1861 gallant Southern politicians gathered at the State Capitol in Montgomery and formed the Confederate States of America. The telegram starting the American Civil War was sent from Montgomery. Stand where Jefferson Davis was inaugurated President and tour the First White House of the Confederacy. Almost 100 years later, Rosa Parks refused to give up her seat on a Montgomery bus and the modern Civil Rights struggle in America was born. Nearby is the Alabama Department of Archives and History where there is a free museum covering the whole history of the state, from the native people through to the civil war, civil rights movement and on to modern day Alabama.
The Scott and Zelda Fitzgerald Museum, found in one of their former homes, is all about the life of Scott and Zelda Fitzgerald – Scott being particularly famous for penning the Great Gatsby.
Montgomery has more than museums. Try Chris’ Hot Dogs, a Montgomery classic diner, serving up this tasty treat since 1917! Also downtown is the Hank Williams Museum, the Harriott II Riverboat, and the Alley Entertainment District.

Travel to Gulf Shores for a beach vacation along America’s best coastline. With white sand beaches and warm Gulf of Mexico waters there is no better place to sun than Alabama’s twin resort cities of Gulf Shores and Orange Beach. All along Alabama’s coast fresh seafood and celebrations abound. Gulf Shores hosts the National Shrimp Festival in October and the Hangout Music Festival in May.

Travel to historic Mobile (1 hour, 50 mi. / 80 km.). Mobile is recognized as having the first-known American Mardi Gras which evolved from a celebration in 1703 to today’s parades and balls leading up to Fat Tuesday each year. During Mardi Gras season, the streets of downtown Mobile are filled with the sights and sounds of live marching bands, brilliantly coloured floats and, of course, teeming crowds of parade goers. All year long the port city of Mobile features the taste of the coast with fresh, delicious seafood and a diverse array of bars, nightclubs, live music venues and southern home tours. Across the bay from Mobile is the romantic city of Fairhope. Venture just a few minutes south of Mobile to Bayou La Batre, the shrimping village in the movie Forrest Gump and scenic Daphne Island

Travel to New Orleans, enjoy live jazz, museums and dining. This South Coast USA city operates non-stop. On your first day, take a walking tour of the French Quarter and enjoy cafe au lait and beignets. Grab a po-boy, gumbo or jambalaya and stroll down Bourbon St for a nightcap. Explore a Cajun swamp a plantation home.

Last stop on our epic road trip is New Orleans. Famous for its massive Mardi Gras, there is so much to di in this city of the South. You could spend 5 days here, particularly during Mardi Gras. That said, there is a lot more to the city than Mardi Gras.
Visit Mardi Gras World to get an appreciation of the carnival.Head to the French Quarter to take in the stunning old buildings. Eat Beignets at Café Beignet, sip coffee at Cafe du Monde. Take a tour of one of the old above ground cemeteries.
Take a river paddle steamer cruise on the Creole Queen down to Jean Lafitte National Historical Park and the historic Chalmette Battlefield

Pricing and Availability from $0