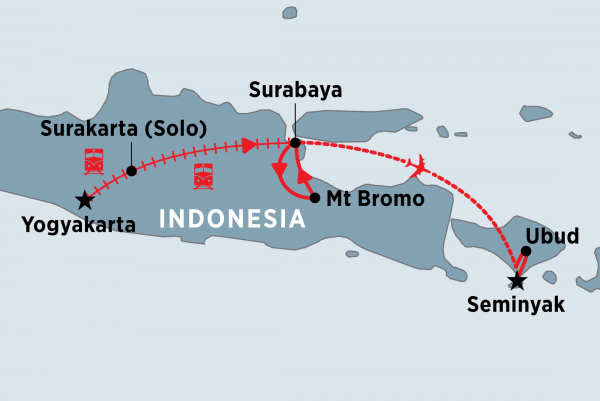 Stray off the beaten track and explore deep into Indonesia as you discover the islands of Java and Bali. With an emphasis on cities of culture and the stunning countryside, this trip begins in Yogyakarta and makes its way east across Java to Surakarta, the imposing Mt Bromo volcano and Surabaya before jumping across to Bali. Eat, pray, love (and eat again) in artsy Ubud before finishing by the beach in Seminyak. Walk past temples, cycle through rice paddies and soak up the laidback vibe that has made these islands a traveller’s favourite.

Open all Close all
Day 1
Yogyakarta
Welcome to Yogyakarta, Java's cultural capital and quite a contrast from the business-oriented Jakarta. Known for its arts, Yogyakarta is a bustling city with a great vibe and plenty of galleries, concerts and more. One of our transfer representatives will collect you from the airport and take you to your hotel. Meet your group at 6 pm for an important welcome meeting, then join everyone for an included group dinner.

Day 2
Yogyakarta
From two feet to two wheels, saddle up for a bike ride in the surrounding countryside this morning. The thing with Yogyakarta is, one minute you'll be enveloped in the city, the next you'll be cruising around flat rural roads with picture-perfect rice paddies and lush tropical scenery. Learn about the biggest local industry, rice production, and interact with the rural communities as they go about their daily routine. Later this afternoon, head to Prambanan: the largest temple complex in Indonesia dedicated to Shiva. Watch the sun set over the pointed towers of this UNESCO-listed site built in the 10th century. With over 500 temples, the temple compound is said to represent not only an architectural and cultural treasure, but also a standing proof of past religious peaceful cohabitation. In the evening, enjoy an included dinner at an open-air restaurant facing Prambanan Temple followed by a performance of Ramayana ballet at an open-air theatre.

Day 3
Yogyakarta
Visit Borobudur, the largest Buddhist structure on earth. This magnificent World Heritage site is set in a tranquil park and as you approach, you'll see the enigmatic temple rise before you, looming above the tropical foliage. Follow the route of ancient pilgrims, circling the mandala-shaped structure from the early realms towards Nirvana. It's truly one of South East Asia's treasures, and best explored in the morning to get the perfect snap. Afterwards, enjoy a free afternoon and evening in Yogyakarta.

Day 4
Surakarta (Solo)
This morning, take a train from Yogyakarta to Surakata (commonly known as Solo), arriving after approximately an hour. You’ll then get driven to Mangkunegaran Royal Palace, which bears slightly different characteristics from other Javanese palaces, due to it being not a ruling house, but an independent kadipaten (district). It has now become the centre of culture and art in Solo City. Afterwards, visit the Batik Village Laweyan, which is one of the oldest batik centres and where most of the population works as traders or batik makers. Here, you will be greeted by the locals and can learn how to make Batik Solo – the traditional cloth of the area, usually made up sogon (chocolate brown) on a pale-yellow background. Enjoy afternoon tea, with a traditional cake from the village, before returning to your hotel for the night.

Day 5
Surakarta (Solo)
Leave the hotel in the morning for a day trip to Nguter, one of the Kampung Jamu (herbal medicine) villages of the area. You’ll visit a traditional Jamu market where you can buy some ingredients before learning how to make Jamu – a traditional medicine said to ail a wide range of sickness, usually taking the form of a type of anti-inflammatory tonic drink. Continue to Bekonang Village to see the process of making ciu (a spirit fermented from sugar cane), and afterwards, head to Wirun Village to watch the traditional techniques of making gamelan (a Javanese musical instrument).

Day 6
Mt Bromo NP
Depart Solo and transfer to the Bromo area, a journey of approximately 4 hours by train, then another 3 hours by private vehicle. Enjoy some free time on arrival at the Jiwa Jawa Hotel, visiting the resort's art gallery, relaxing in the gardens or simply taking in the lush surroundings. Be sure to bring some warm clothes too as it does get cold in this region, especially during tomorrow's early start.

Day 7
Mt Bromo NP - Surabaya
Depart very early (3 am) for a morning that won't be forgotten anytime soon. The early start is well worth it to visit Mt Bromo for sunrise. If the weather is clear, the sunrise over this eerie sea of volcanoes in the morning mist is a truly remarkable experience. The ascent is not too difficult, but it can be very cold, so don't forget to bring extra layers of clothing. It's also worth bringing a scarf to cover your nose and mouth as it can get dusty. Look over the giant crater's edge then return to the hotel for breakfast afterwards then drive to Surabaya, a port town north of Bromo. The evening is free to catch up on some sleep or explore Surabaya in search of a fresh seafood feast.

Day 8
Ubud
Transfer to the airport for a flight to Bali, Indonesia's most famous island. Transfer 1.5 hours to Ubud, arriving late in the afternoon and make the most of a free evening. Ubud is Bali's main arts and cultural centre, and its busy but laidback atmosphere attracts travellers from all over the world. It's a wonderful place to experience the magic that has made Bali such a popular travel destination.

Day 9
Ubud
Prepare for a full day sightseeing around Ubud. Visit Tirta Empul, a temple famous for its holy spring water where Balinese Hindus go for ritual purification, and Gunang Kawi, an 11th-century temple complex centred around royal tombs carved into the cliffs. Continue to the Blanco Museum and the rice fields just outside of Ubud, where you will stop at an organic restaurant with food and views to die for, then on to Pura Taman Saraswati (the Lotus Temple) before finishing the day with an evening kecak dance performance.

Day 10
Seminyak
Depart Ubud for Seminyak, visiting the Taman Ayun Temple on the way. The journey takes approximately 2 hours and the rest of the afternoon is free for you to enjoy this popular beach destination. Explore the restaurants and cafes at your own pace, hunt down some of the designer shops and galleries or just mellow out on the beach before your trip comes to an end tomorrow. A final dinner is included tonight to say farewell to your group and leader.

Day 11
Seminyak
Your trip ends today after breakfast. There are no activities planned and you are free to depart at any time. 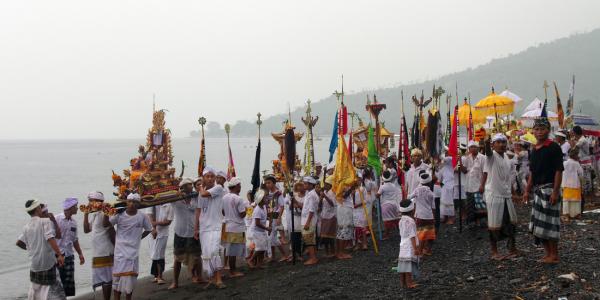 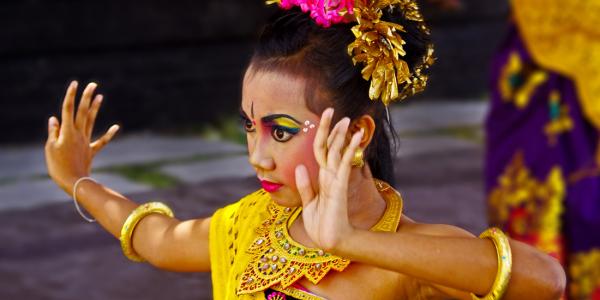 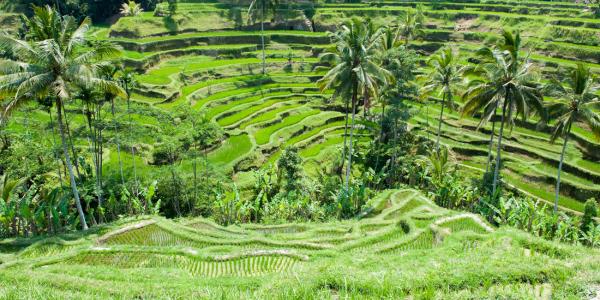 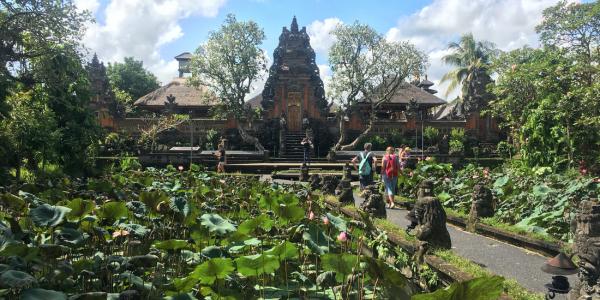 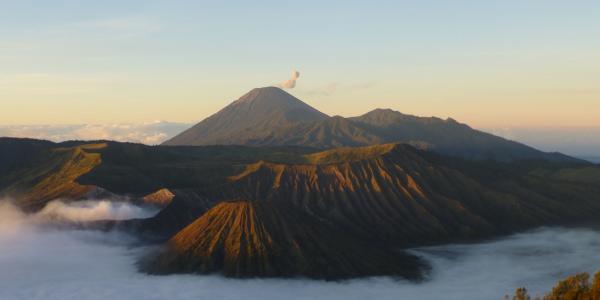 Pricing and Availability from $2,930