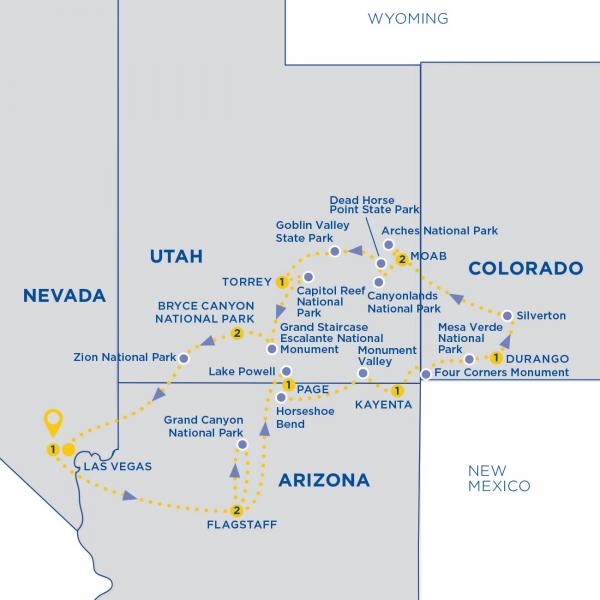 Native American history, Martian esque landscapes, wild western antics and fast and fabulous Sin City fun - this trip has it all, and so much more. Starting off in Las Vegas, you'll travel via Route 66 to the mighty Grand Canyon, cruise across glittering Lake Powell and stand in awe at Monument Valley, all before boarding Durango's famous locomotive and watching the sun set amidst the spectacular spires of Bryce Canyon.

Open all Close all
Day 1
Arrive Las Vegas
An entertainment oasis surrounded by dry desert with a reputation almost as big as the fortune's many have made (and lost) here, Sin City is a place unlike any other. The entertainment capital of the world, Vegas is famed for its glittering casinos, all you can eat buffets and shot gun weddings ordained by none other than Elvis himself, so you really are starting as you mean to go on by kicking off your trip here! After settling in to your hotel and meeting up with your Travel Director this afternoon, the bright lights and bizarre antics of Vegas will undoubtedly lure you in. Take a walk down the Strip, where the city's finest hotels and grandest casinos can be found, or head over to the Downtown area to explore the artsy Freemont East district.

Day 2
Las Vegas – Flagstaff (2 Nights)
We hope you're hungry as breakfast this morning is as Vegas as they come; a French themed buffet at Le Village Paris. Cooking up culinary delights from 5 different French provinces, the live action stations and multiple buffet areas will ensure you don't go hungry. Leaving Vegas with full bellies and a little lighter in the pocket, we then have one question for you - are you ready to get your kicks on Route 66? If the answer's yes, today's the day to do it. Heading east, you'll take your place in road tripping history as you cruise down America's most iconic road, stopping off at Seligman and Kingman on the way for a taste of all things Americana, complete with classic motels, kitsch petrol pumps and steaming slices of apple pie. Finally, you'll finish today in friendly Flagstaff.

Day 3
Grand Canyon Excursion
Nothing can quite prepare you for your first glimpse of the Grand Canyon. One of the world's 7 natural wonders and a UNESCO World Heritage site, it's estimated to be around 2 billion years old, with a layer of rock at the bottom of the canyon said to be some of the oldest exposed rock on the planet. Take your time exploring the incredible geology of the land, or to make your visit extra special why not treat yourself to an Optional Experience that could see you flying in a helicopter or aircraft over the North and South rims. Feeling distinctly in awe you'll then visit the Grand Canyon Village, which boasts some impressive national historic landmarks and historical buildings.
Day 4
Flagstaff– Lake Powell – Page
This morning before you depart your Flagstaff hotel, enjoy an Iconic Breakfast at Charly's Pub & Grill. You will then make a stop at Wupatki National Monument, a landscape dotted with over 2700 pueblo ruins built by the ancestors of the Hopi, Zuni and Navajo people. Driving on through the Painted Desert, named for its rainbow of colourful sedimentary layers stretching some 260 miles into the horizon, you'll then arrive at sparkling Lake Powell. America's second largest man made reservoir and something of a mirage in an otherwise landlocked desert, you'll have the chance to board a cruise that will open up the fascinating geography of the area. Travelling through canyons and spotting towering Navajo sandstone formations that boggle the mind, this is an optional not to be missed. Tonight, you'll spend the evening in Page.

Day 5
Page – Horseshoe Bend – Monument Valley – Kayenta
Giving the term 'iconic' a whole new meaning, Horseshoe Bend is up first on today's roll call of phenomenal sites. Carving a perfect horseshoe shape through the 1000 feet sandstone cliffs, test your nerve as you peak over the edge before heading on to explore Monument Valley in an open air-vehicle. Immortalised as the setting for countless movies and TV shows, Monument Valley is an emblem of the wild west, its rusty red spindles and grand buttes thrusting 1200 feet skyward from the barren valley below. Named the 'Valley Between the Rocks' by the Navajo people who arrived here centuries ago, you'll likely feel very small and insignificant here as you learn about the geology and history of the area.

Day 7
Durango – Silverton – Moab (2 Nights)
Before you depart Durango, railway fans can opt to board a traditional coal-fired locomotive to explore the remote wilderness in style. Afterwards, it will be all eyes to the horizon today as you make the spectacular drive through the San Juan Mountains, passing wildflower meadows and majestic peaks as you soak in some of the most glorious nature in all of the United States. Stopping first in Silverton, make a beeline for Empire, formerly known as Blair Street, which was once notorious for brothels and boozy establishments during the silver rush period. Journeying on, you'll pass through Ouray (pronounced you-ray), a little town sandwiched between towering peaks, before arriving into Moab, Utah's adventure capital. Surrounded by rugged, rusty red canyons, this place is basically a pilgrimage for mountain bikers and hikers alike looking to escape civilisation in the other worldly landscape.

Day 8
Arches National Park and Free Time
Another day, another blockbuster icon, this time courtesy of Arches National Park. Over 2500 naturally formed sandstone arches cover the landscape here, more than anywhere else on earth, and standing in absolute amazement the one question you'll likely be asking, is 'how?'. A highlight of the park and the most photographed of all the sites, is Delicate Arch. Standing 60 feet tall and in stark contrast to the horizontal planes surrounding it, this natural wonder is one of the enduring symbols of the American West. For an even better view, join us for an Optional Experience^ hike which steadily climbs 480 feet uphill for uninterrupted and unparalleled views which may require a moderate level of fitness.

Day 9
Moab – Canyonlands National Park – Dead Horse Point State Park – Goblin Valley State Park – Torrey
Strong coffee and a big breakfast are the two requirements this morning to prepare for another action packed day of sightseeing. First up is Canyonlands, Utah's largest national park that boasts sky high canyons, deep craters and majestic buttes, forming an other worldly landscape. Stopping by the 'Island in the Sky' mesa for sublime views and sheer sandstone cliffs, you'll then travel on to Dead Horse Point, another soaring mesa that sits 2000 feet above the Colorado River and is one of the most photographed vistas in the world. From one bizarrely named place to the next, strange, colourful and wonderful Goblin Valley State Park is your next stop, its sandstone goblins and twisted formations creating a striking resemblance to the surface of Mars. Enthralled, amazed and likely exhausted, you'll spend the night in quiet Torrey.

Day 10
Torrey – Capitol Reef National Park – Grand Staircase Escalante National Monument – Bryce Canyon National Park (2 Nights)
Once called the 'Land of the Sleeping Rainbow' by Native American settlers, Capitol Reef's colourful landscape, prominent domes and sedimentary canyons will be your first port of call today. It's here you'll also find Waterpocket Fold, a 100 mile long crack in the earth's crust that's well worth a look. Driving along Byway 12, we challenge you to drag your eyes away from the windows as you twist and turn through Dixie National Forest, its towering ponderosa pines stretching into the distance as far as the eye can see. As if the sights couldn't get any better, you'll then stop off at the 260 million year old Grand Staircase, named for its uniquely striped layers of rock, before finishing yet another spectacular day amidst the sunset coloured spires of Bryce Canyon.

Day 11
Bryce Canyon National Park and Free Time
Have we saved the best till (almost) last? That will be the question on everyone's lips as you venture into Bryce Canyon National Park, where repeated freezes and thaws of the parks soft sandstone and limestone landscape over millions of years have created the bizarre formations you'll find here. Stand in puzzlement in front of the multicoloured 'hoodoos' and vast amphitheatres that signify the environment of Bryce Canyon, then take a stroll along one of the many juniper lined trails to one of the view points hugging the rim of the Paunsaugunt Plateau. Tonight, why not opt in for a dinner and show for some good old fashioned western fun and see out your trip in style.
Day 12
Bryce Canyon – Zion National Park – Depart Las Vegas
Travelling back to Vegas today you'll make one final stop at Zion National Park, where the soaring red and white cliffs and vast canyons stand in stark contrast to the soft wildflower meadows and hanging gardens that can also be found here, a result of the park's lower elevation in comparison to the others. Travelling along the Virgin River Gorge for your final drive, you'll no doubt be feeling reflective about the incredible sights and experiences you've witnessed over the past 12 days. Your trip will come to an end at McCarran International Airport, or at Rio All-Suites Hotel for those extending their stay in Sin City.
Note: Airport arrival will be at approximately 6 p.m., please be aware when booking your flights.

Pricing and Availability from $2,590